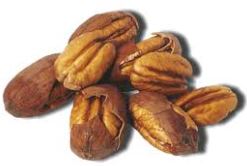 How did I miss National Pecan Month?  It was the entire month of April and I am just writing about it in the last week!   Actually, we attended a meeting of a local senior care networking group at Highgate at Paoli Pointe last week, I picked up a copy of their monthly newsletter and saw a sidebar article about National Pecan month.

So the first thing that happened is that Dara and I got in a debate over pronunciation.  I say "peek-can" and she says "Pi-kahn."  According to dictionary.com, we are both right!  Who knew?  Whew... marital discord avoided!

OK, moving on to the fine little Pecan.  First, it's history:  The pecan tree is a deciduous  species of hickory tree native to Mexico and the south central and southeastern regions of the United States.  A pecan, like the fruit of all other members of the hickory family, is not truly a nut, but is officially a drupe.  That's a fruit with a single stone or pit, surrounded by a husk.  Again, who knew?  And what the heck is a drupe?  I must have been asleep in high school biology that day!

Now really, you ask, why the heck are you writing about the pecan on a blog of senior home care topics?  Well, it is a quite healthy snack, that's why!  Did you know:

If this blog didn't provided enough scintillating facts about Pecans for you, then read more on the I Love Pecans web site!  Who knew?