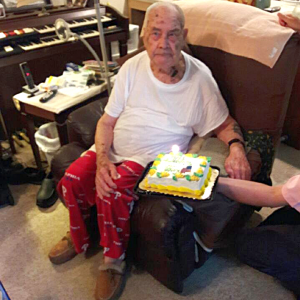 Melville McKenney on his 100th birthday

This last week, Seniors Helping Seniors was honored to help celebrate the 100th birthday of one of our oldest clients. WWII Veteran Melville McKenney, more commonly known as just Mel, lives in Perkiomenville, PA. One of our co-owners, Brad Trout, visited along with SHS’s two summer interns from Ursinus College, Deegan Miller and myself, Maddie Kuklentz.

Mel welcomed us into the home he shares with his daughter, son-in-law, and one very energetic golden retriever. Surprisingly mobile for his age, he stood up to say hello and insisted on hugging us as a welcome.  We shared a birthday cake over an incredibly eye-opening conversation.

Mel described his childhood as only “so-so,” as his mother had passed away when he was still young. His family lived on the coast of Maine in a small fishing village. Mel’s father was a commercial fisherman, and knew how to find food for his family during the Great Depression. “We’d dig up a bushel of clams, take them, and swap them for food, for baked bread, and clothes,” Mel remembers. “It was a swapping situation, no money involved.  Money wasn’t anything.”

The McKenneys also ate fish and shellfish they caught, along with a pig they would raise through the winter. Because of their resourcefulness, Mel’s family survived relatively well through one of the darkest periods in our country’s recent history.

Eight years after his mother’s death, Mel’s father remarried, but his new wife treated the McKenney children poorly. Seeing no other option, Mel and his brother ran away from their home. They joined the army in December 1939 and began two years of training. Normally, they would have been discharged after this service, but their training ended as the United States’ time in WWII began.

Even all these years later, I could still see the weight of the war in Mel’s face. Mel wholeheartedly believed that murdering another person was the worst thing someone could do. However, infantry training taught soldiers to kill. “You’re trained that if there’s an enemy up in front of you, you got to clear the area—make it safe for the rest of us to live in freedom. If you don’t, they’re going to take over,” Mel recalls. “You had to kill in order to live.” 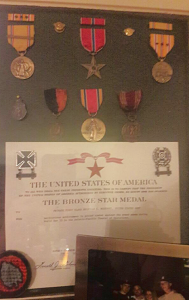 In the end, Mel’s patriotic spirit carried him through the war. He was willing to give his own life for his country, and asked God for forgiveness for engaging in warfare.

During his four years of service, Mel became a Pearl Harbor survivor, fought in the Guadalcanal campaign against the Japanese, and earned three bronze stars for his combat duty. “Bronze stars are for missions. Like in the Canal, we had heard that there was a hotbed of Japanese that was preventing us from getting through to clear the place out. I went on three of those missions, and those are my bronze stars.”

His humility regarding his bravery is astounding. Out of his three bronze stars, Mel has given two away—one to his niece, who is wheelchair-bound. “She thinks I’m terrific,” he admitted.

Mel’s service ended abruptly when he contracted malaria. At one point, his body temperature spiked to 105°F and he became delirious from the illness. The reason he survived such an intense fever was only because the heat of the tropics had made his blood so thin.

After  two weeks in a hospital in New Caledonia, his nurse woke Mel up late one night. She called him by his nickname, saying, “Scotty, you’re going home. You’re being discharged.”

The USS Mount Vernon took Mel back to the United States in San Francisco. After spending two more weeks in a hospital there, he finally went home to Maine.

Returning home was not easy, according to Mel. Because he had lived in the tropics for so long, his core temperature had acclimated to the heat. His return to Maine occurred in the middle of a bitterly cold winter, which was a tremendous shock for his body. Even after that winter, Mel couldn’t get warm for years.

Even if his normal body temperature has been restored, WWII has left a lasting impact on Mel. “I’ve seen horror, I’ve seen things that give you nightmares when you bring it up,” he recalls. Despite these traumatic memories, Mel still insists that if he were physically capable, he would gladly serve our country once more.

Mel’s incredible mind still remembers more than just the war, and he was glad to share some small tidbits of personal trivia. For instance, out of all the years he has lived, Mel asserts that the 1940s were his favorite decade by far. “The forties were the best years of this country’s life—the mid-forties. Definitely,” Mel confirmed. He admires this decade both due to the patriotism and the strides in women’s rights made by President Roosevelt.

When I asked him about the most fascinating technological development he had witnessed, he was stumped for a minute. “Oh my god, there’s so much,” he marveled. Mel finally settled upon the invention of the car as his favorite. The first car he had ever seen as a child was the classic Model T Ford, which needed a crank in the front for the engine to start. Cars struck him as the most impactful technological development in his lifetime because of the freedom they gave the world. Mel can still recall when people had to use horses and buggies for transportation during his childhood and when the highways were still unpaved gravel.

Out of all the music he’s heard in a century, Mel settled on two songs as his favorites. He described “Ave Maria” as “a most beautiful number.” He also admitted he loves to hear his son-in-law sing songs, particularly Bette Midler’s “Wind Beneath My Wings.” Mel himself is also musically talented. He enjoys playing the organ, guitar, piano, and accordion all by ear. Despite his love for music, Mel’s hands are starting to fail him in his old age, which is why he is so grateful to have a musically gifted son-in-law.

Of course, when talking with someone who has just turned 100 years old, I had to ask his advice for living a long life. It turns out that staying positive is the key. “I always believe in looking up,” he told me. “Thinking positive. There’s no value in negative in life.” Because negativity is so useless to him, Mel deems anger and hatred as wastes of using our brains.

Mel especially values relationships with others, because compassion is so important to him. “I believe I should trust. I trust even though it seems stupid or wrong, but when you fail in trusting, you fail in everything in life,” he explains. “We are not an island onto ourselves.” Because the entire world depends on one another for food and resources, Mel believes that trusting and caring for each other is our only option.

With such an incredible 100 years behind him, Mel is determined to live another 100 more. Happy Birthday, Mel, from all of us at Seniors Helping Seniors!

Want to learn more about Mel’s incredible story? Feel free to watch this interview from 2015 here!

Interested in learning more about our local veterans? Check out this story on Joe Valentino, a veteran from Chester County, here!